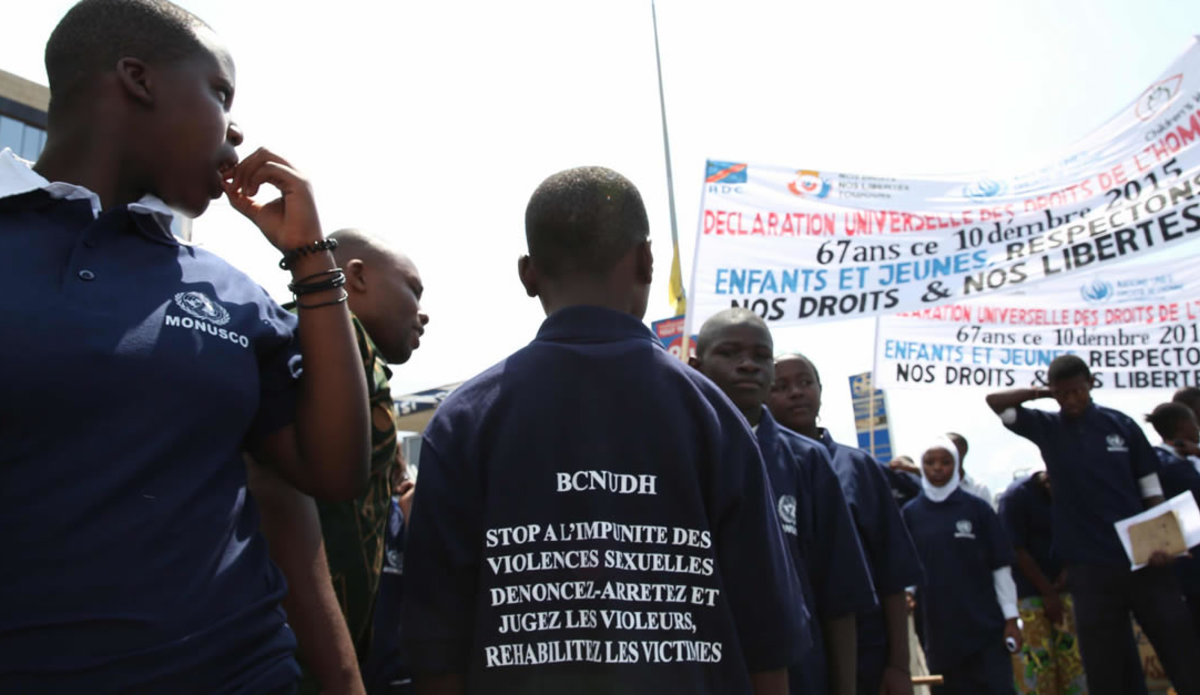 What is the UNJHRO's mandate?

The United Nations Joint Human Rights Office (UNJHRO) was created in February 2008 and is comprised of the MONUSCO Human Rights Division (HRD) and the former Office of the UN High Commissioner for Human Rights in the DRC (OHCHR/DRC). The two offices have been fully integrated and the UNJHRO functions in accordance with their two mandates.

The MONUSCO Human Rights Division (HRD), established in 2000, was mandated by the UN Security Council (Resolutions 1756 of 15 May 2007, 1794 of 21 December 2007, 1856 of 22 December 2008) to “assist in the promotion and protection of human rights, with particular attention to women, children and vulnerable persons, investigate human rights violations with a view to putting an end to impunity, assist in the development and implementation of a transitional justice strategy, and cooperate in national and international efforts to bring to justice perpetrators of grave violations of human rights and international humanitarian law”.

The OHCHR/DRC, established in 1996 by an agreement between the UN High Commissioner and the Government of the Democratic Republic of Congo (DRC), was mandated to monitor the human rights situation in the country, to present reports on human rights violations that require urgent interventions by any of the thematic Independent Experts, and to reinforce national institutions (both governmental and non-governmental) working on human rights issues to ensure that the DRC increased respect for provisions of international and regional treaties to which it is a State Party.

On 23 December 2009, UN Security Council Resolution 1906 (2009), extending the MONUC mandate until 31 May 2010, was unanimously adopted. In this resolution, the Security Council recognizes that lasting peace in the DRC cannot be achieved without increasing the respect for human rights by state security forces (para. 4). As the resolution refers directly or indirectly to human rights in almost every one of its paragraphs, it creates possibilities for improving respect for human rights in the DRC and creates demands on the UNJHRO to assist the DRC government and MONUC in implementing the renewed mandate.

What do we do and how?

The overall human rights situation in the DRC is a cause of grave concern. Arbitrary execution; rape; arbitrary arrests and detention; torture; cruel, inhuman or degrading treatment; and pillaging are committed by both State agents and armed groups. Even though in July 2009, the President of the DRC called for a “zero tolerance” policy for human rights violators within the Congolese security forces, impunity for human rights violations remains pervasive. Governance problems contributing to human rights violations and the absence of the rule of law adversely affect the quality of life for Congolese people throughout the country every day.

In its overall approach, the UNJHRO aims to lay the groundwork for MONUSCO’s departure by encouraging Congolese citizens to complain to authorities about human rights violations, and by enhancing the Government’s capacity to respond to citizens’ complaints. It will achieve this by: increasing citizens awareness of their rights, expanding the political and democratic space for citizen complaints, empowering civil society to advocate for human rights,  increasing the awareness of Government institutions of their human rights obligations, increasing the capacity and will of Government actors to effectively respond to violations, and by pushing for a human rights perspective among international actors working in the DRC.

The day to day work of the UNJHRO consists of reporting human rights violations, assisting victims to seek and obtain remedies for these violations. The UNJHRO also advocates with State officials and other actors to improve the human rights situation, including lobbying for the adoption of laws and policies that comply with international human rights standards to combat impunity. The UNJHRO’s methodology has been drawn from the best practices of other similar efforts and from strategies and work plans developed by the UNJHRO’s Task Forces, Units and Field Teams. The UNJHRO has an established presence across the country with headquarters in Kinshasa, 13 field offices and 6 sub-offices (see list of the offices).

In 2009, the UNJHRO introduced a new work methodology that focuses its attention on five of the most severe and widespread types of human rights violations in the DRC. This new approach created five Task Forces (TFs), each one focused on one of the following five priority areas: Sexual and gender based violence; Summary and arbitrary executions; Arbitrary arrests and illegal detentions/disappearances; Torture and deaths in detentions; Violation of economic rights /illegal mining.  These TFs organize the everyday work of the UNJHRO. Each TF is composed of representatives from the field offices and from specialized units who collaborate to develop strategies to improve the level of respect of human rights in the TF’s subject area. (Click here to read more about the Task forces.)
Nationwide programmes to support victims and witnesses of human rights violations have also been introduced to better manage projects of the international community that are being implemented in the provinces, including the:

Following-up of human rights violations and assisting in bringing cases to justice.

The Field Offices gather information on allegations of human rights violations and abuses through a wide network of partners (such as NGOs, civil society actors, UNPOL, the MONUSCO Force, the protection cluster, and others). The Field Offices verify allegations and report on human rights violations by corroborating the information received by conducting field missions. To prevent threats, the UNJHRO, together with its protection network of NGOs, has developed mechanisms to protect victims and witnesses. The UNJHRO focuses on cases which are beyond the capacity of other actors (such as NGOs and prosecutorial authorities). Cases brought to the justice system are followed up and the progress in each case is tracked. UNJHRO also advocates for the respect of criminal procedure and the improvement of conditions in detention facilities.

Assisting the State to respond to human rights violations

To strengthen the nationwide Access to Justice Programme, the UNJHRO provides logistical, technical and financial assistance to judicial authorities and partners for the prosecution of cases. Moreover, the UNJHRO supports State institutions, such as the National Assembly through the parliamentary network for human rights to strengthen their capacity to receive complaints of citizen.

In addition to the Field Offices, the UNJHRO is organized in several specialized units:
Print Email Twitter Facebook