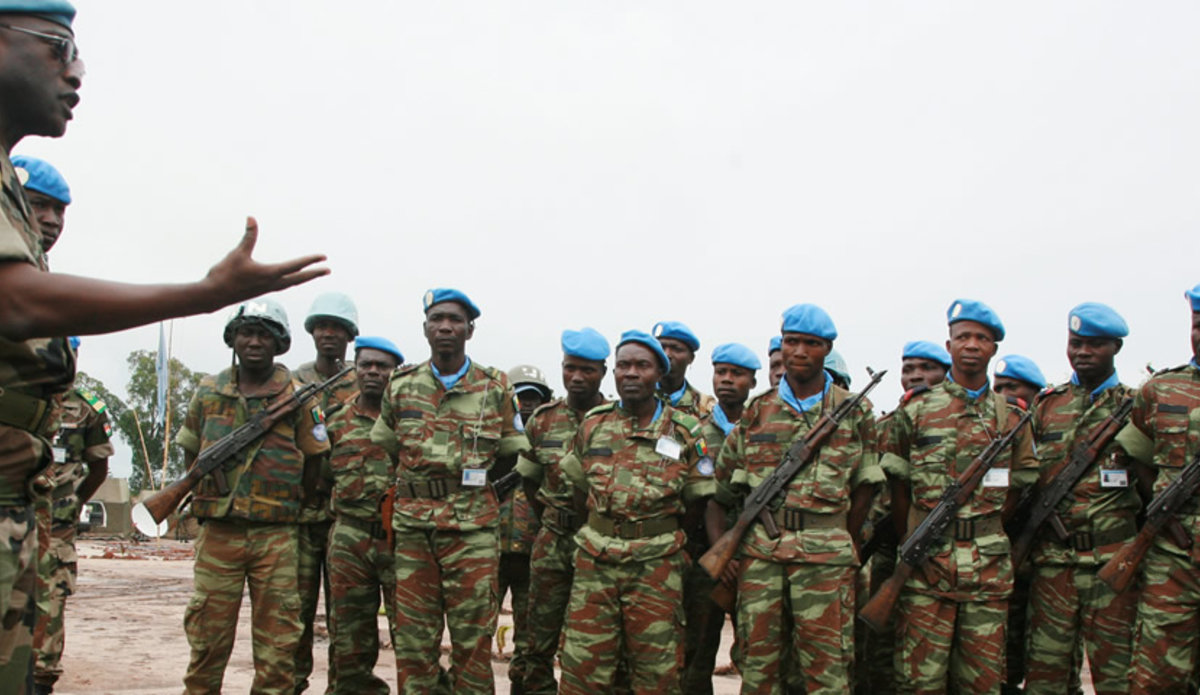 Following the 1994 genocide in Rwanda and the establishment of a new government there, some 1.2 million Rwandese Hutus — including elements who had taken part in the genocide — fled to the neighbouring Kivu regions of eastern DRC, formerly Zaïre, an area inhabited by ethnic Tutsis and others. A rebellion began there in 1996, pitting the forces led by Laurent Désiré Kabila against the army of President Mobutu Sese Seko. Kabila’s forces, aided by Rwanda and Uganda, took the capital city of Kinshasa in 1997 and renamed the country the Democratic Republic of the Congo (DRC).

In 1998, a rebellion against the Kabila government started in the Kivu regions. Within weeks, the rebels had seized large areas of the country. Angola, Chad, Namibia and Zimbabwe promised President Kabila military support, but the rebels maintained their grip on the eastern regions. Rwanda and Uganda supported the rebel move­ment, the Congolese Rally for Democracy (RCD). The Security Council called for a ceasefire and the withdrawal of foreign forces, and urged states not to interfere in the country’s internal affairs.

Following the signing of the Lusaka Ceasefire Agreement in July 1999 between the Democratic Republic of the Congo (DRC) and five regional States (Angola, Namibia, Rwanda, Uganda and Zimbabwe) in July 1999, the Security Council established the United Nations Organization Mission in the Democratic Republic of the Congo (MONUC) by its resolution 1279  of 30 November 1999, initially to plan for the observation of the ceasefire and disengagement of forces and maintain liaison with all parties to the Ceasefire Agreement. Later in a series of resolutions, the Council expanded the mandate of MONUC to the supervision of the implementation of the Ceasefire Agreement and assigned multiple related additional tasks.

The country’s first free and fair elections in 46 years were held on 30 July 2006, with voters electing a 500-seat National Assembly. Following a run-off election for the presidency on 29 October, and resolution of a subsequent legal challenge, President Joseph Kabila (son of late Laurent Désiré Kabila assassinated in 2001) was declared the winner. The entire electoral process represented one of the most complex votes the United Nations had ever helped organize.

Following the elections, MONUC remained on the ground and continued to implement multiple political, military, rule of law and capacity-building tasks as mandated by the Security Council resolutions, including trying to resolve ongoing conflicts in a number of the DRC provinces.

On 1 July 2010, the Security Council, by its Resolution 1925, renamed MONUC the United Nations Organization Stabilization Mission in the Democratic Republic of the Congo (MONUSCO) to reflect the new phase reached in the country.

The new mission was authorized to use all necessary means to carry out its mandate relating, among other things, to the protection of civilians, humanitarian personnel and human rights defenders under imminent threat of physical violence and to support the Government of the DRC in its stabilization and peace consolidation efforts.

The Council decided that MONUSCO would comprise, in addition to the appropriate civilian, judiciary and correction components, a maximum of 19,815 military personnel, 760 military observers, 391 police personnel and 1,050 members of formed police units. Future reconfigurations of MONUSCO would be determined as the situation evolved on the ground, including:  the completion of ongoing military operations in North and South Kivu as well as the Orientale provinces; improved government capacity to protect the population effectively; and the consolidation of state authority throughout the territory.

Although significant progress has been achieved in the DRC since the establishment of UN peacekeeping operation there and the situation in many regions of the country has generally stabilized, the eastern part continued to be plagued by recurrent waves of conflict, chronic humanitarian crises and serious human rights violations, including sexual and gender-based violence. Contributing to the cycles of violence have been the continued presence of Congolese and foreign armed groups taking advantage of power and security vacuums in the eastern part of the country; the illegal exploitation of resources; interference by neighbouring countries; pervasive impunity; intercommunal feuds; and the weak capacity of the national army and police to effectively protect civilians and the national territory and ensure law and order.

The recurrence of such cycles of violence, as exemplified by the major crisis in North Kivu which started in April 2012, continued to be an obstacle to peace in the DRC and threatened the overall stability and development of the Great Lakes region. In order to address the underlying causes of conflict and ensure that sustainable peace takes hold in the country and the wider region, the Peace, Security and Cooperation Framework for the Democratic Republic of the Congo and the region was signed by representatives of 11 countries in the region, the Chairs of the African Union, the International Conference on the Great Lakes Region, the Southern African Development Community and the United Nations Secretary-General on 24 February 2013 in Addis Ababa, Ethiopia.

On 28 March 2013, acting in support of the objectives of the Framework agreement for Peace, Security and Cooperation for the Democratic Republic of the Congo and the region, and answering the call of Governments in Africa’s Great Lakes region, the Security Council unanimously adopted resolution 2098 (2013), by which it extended until 31 March 2014, the mandate of MONUSCO and created a specialized “intervention brigade” to strengthen the peacekeeping operation.

Acting on the recommendations contained in the 27 February special report, the Council decided that such a brigade would be set up for an initial period of one year and within the authorized troop ceiling of 19,815, on an exceptional basis and without creating a precedent or any prejudice to the agreed principles of peacekeeping. It would consist of three infantry battalions, one artillery and one special force and reconnaissance company with headquarters in Goma, and operate under direct command of the MONUSCO Force Commander, with the responsibility of neutralizing armed groups and the objective of contributing to reducing the threat posed by armed groups to state authority and civilian security in eastern DRC and to make space for stabilization activities. It was also decided that intervention brigade would have a clear exit strategy and that the Council would consider extending its mandate beyond one year on the basis of its performance, and of whether the DRC had made sufficient progress in implementing the Peace and Security Framework for the region.

The resolution strongly condemned 23 March Movement (M23), the Democratic Forces for the Liberation of Rwanda (FDLR), the Lord’s Resistance Army (LRA) “and all other armed groups and their continuing violence and abuses of human rights”.  It tasked the new brigade with carrying out offensive operations, either unilaterally or jointly with the Congolese armed forces, “in a robust, highly mobile and versatile manner” to disrupt the activities of those groups.

With regard to the Peace and Security Framework for the region, brokered by the Secretary-General, the Council demanded that all signatory States implement their commitments in good faith, and encouraged the establishment of an oversight mechanism involving regional leaders, as well as a national mechanism to oversee implementation of reform measures agreed by the Democratic Republic of Congo.

On 28 March 2014, the Security Council, by its Resolution 2147, extended the mandate of MONUSCO until 31 March 2015 and decided that the renewed mandate would also include MONUSCO’s Intervention Brigade — “on an exceptional basis and without creating a precedent or any prejudice” — within the authorized troop ceiling of 19,815 military personnel, 760 military observers and staff officers, 391 police personnel and 1,050 formed police units.

At the same time, the Council noted the need for a clear exit strategy and decided that the Mission’s further reconfigurations and mandates should be based on the evolving situation and progress towards several objectives set out in accordance with its three priorities — protecting civilians, stabilizing the country, and supporting implementation of the Peace, Security and Cooperation Framework for the Democratic Republic of the Congo and the region.

On 30 March 2016, the Security Council extended the mandate of the United Nations mission in the Democratic Republic of the Congo (DRC) for another year (Resolution 2277), warning that the humanitarian situation remains of great concern, as well as the delays in preparing for the November presidential elections.

On March 27, 2018, the Security Council adopted Resolution 2409 extending until March 31, 2019 the mandate of MONUSCO in the DRC, including its intervention brigade. The Council also authorized a troop ceiling comprising 16,215 military personnel, 660 military observers and staff officers, 391 police officers and 1,050 members of formed police units. MONUSCO's strategic priorities are to contribute to the following objectives: a) Protection of civilians; b) Support for the implementation of the December 31, 2016 Agreement and the electoral process.

Noting that the situation in the Democratic Republic of Congo (DRC) continued to pose a threat to international peace and security in the Great Lakes region, UN Security Council adopted the Resolution 2348 (2017) extending for 12 months, until March 31, 2018, the mandate of the United Nations Mission in the DRC (MONUSCO) and reducing the Mission’s military personnel by 3,600 peacekeepers. Under the terms of this Resolution, MONUSCO's strategic priorities were to contribute to: Ensuring the protection of civilians, Supporting the implementation of the December 31, 2016 Agreement and the electoral process with a view to contributing to the stabilization of the Democratic Republic of the Congo.

On March 27, 2018, the Security Council adopted the Resolution 2409 extending until March 31, 2019 MONUSCO's mandate in the DRC, including its intervention brigade’s. The Council also authorized a troop staffing level comprising 16,215 military personnel, 660 military observers and staff officers, 391 police officers and 1,050 members of the formed police units.

In this resolution and for the first time, the Security Council called on the Secretary-General to develop a phased, progressive and comprehensive exit strategy in collaboration with the Government of the Democratic Republic of the Congo, the United Nations country team and other relevant stakeholders, so as to promote country’s ownership and gradually transfer tasks for the purposes of an orderly withdrawal by MONUSCO.

By deciding to extend MONUSCO's mandate for an additional year, that is until December 20, 2020, the Council also renewed the same strategic priorities for MONUSCO, through the Resolution 2502 adopted on December 19, 2019.

On December 18, 2020, the Security Council adopted the Resolution 2556 and decided to extend MONUSCO's mandate in the Democratic Republic of the Congo until December 20, 2021 and, on an exceptional basis and without setting a precedent or calling into question the agreed principles governing peacekeeping operations, by its intervention brigade.

Through this Resolution, the Council decided that MONUSCO's strategic priorities were to contribute: a) To ensuring the protection of civilians, as set out in sub-paragraph i) of paragraph 29 of this resolution; b) To supporting the stabilization and strengthening of State institutions in the Democratic Republic of the Congo as well as main governance and security reforms. This is MONUSCO's current mandate.