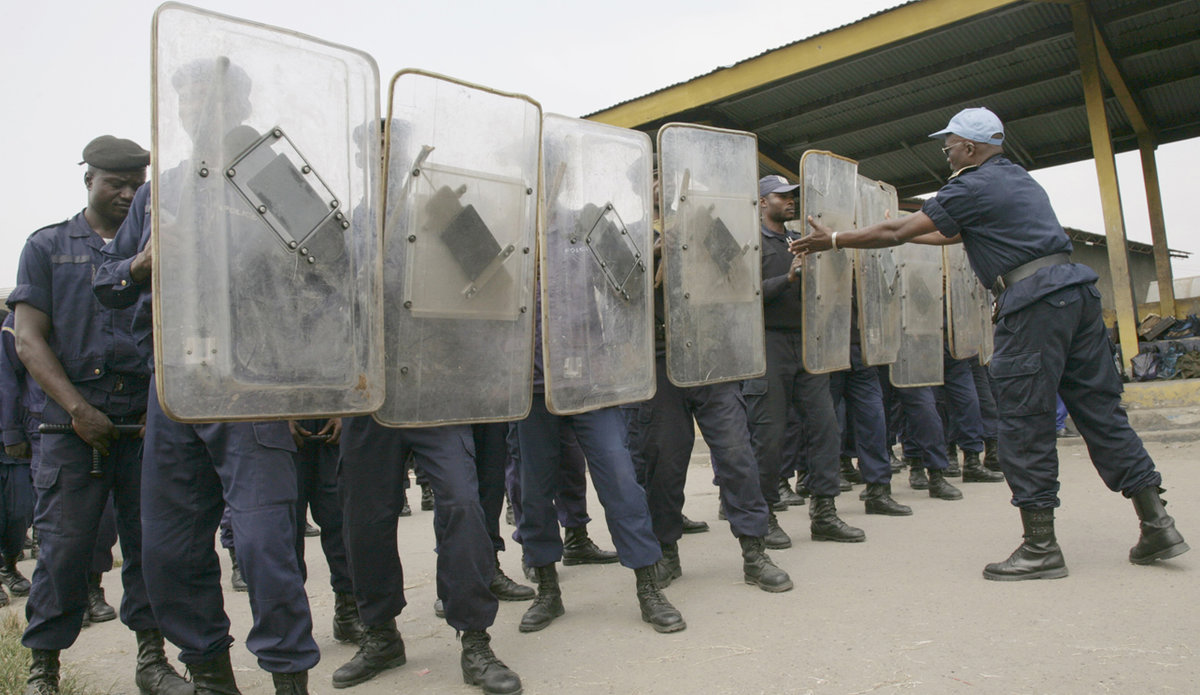 UN Security Council Resolution 2556 (2020) extended MONUSCO's mandate until 20 December 2021. The Council endorsed the Joint Strategy on MONUSCO's phased withdrawal and transition milestones, as well as its planned withdrawals from Kasai in 2021 and progressively from Tanganyika in 2022, and the gradual consolidation of MONUSCO's footprints in the three provinces where active conflict persists while continuing its good offices and institution-building work at the national level as recommended by the Joint Strategy, including the continuation of an early warning system.

2. Support for the stabilization and strengthening of the Congolese public institutions and key governance and security reforms. The Mission is implementing these priorities in the context of the reconfiguration based on the "primacy of politics" when the new government has been formed and the joint working groups have started their regular meetings and decision-making process.

Under the Security Council Resolution 2556 (2020), MONUSCO Police focused on the following main tasks, among others, throughout the six-month period under review:

(a) Protection of civilians: Participation in the comprehensive approach to the protection of civilians in collaboration with the other components of the Mission, in particular through the reduction of threats posed by Congolese and foreign armed groups and violence against civilians, including sexual and gender-based violence. Support to the Congolese National Police (PNC) in the fight against organised crime through co-location in specialised investigation units, training, and provision of forensic equipment (SOCSS and SPT).

(b) Stabilization and strengthening of state institutions in the DRC as well as key governance and security reforms: Stabilization and restoration of state authority in collaboration with other components and sections of the Mission through the establishment of functional, professional, and accountable security institutions. Intensified advocacy with PNC authorities to take over security responsibilities in order to increase their performance in areas affected by armed groups or inter-ethnic conflicts, areas of origin of internally displaced persons, and refugee camps, through the implementation of the community policing concept.

(c) Support for security sector reforms: ensure the strengthening of the operational and institutional development of the police while encouraging the DRC authorities to ensure national ownership of the police reform process and advocating for the creation of the General Secretariat for Public Order which will coordinate the institutions in charge of security with regard to law enforcement.

(d) Child Protection, Gender Mainstreaming, Combating Sexual Violence and Prevention of Sexual Exploitation and Abuse (SEA): Ensure the prevention of misconduct within the component through the implementation of the UN and Police Component Guidelines; promote gender parity within and outside MONUSCO. Raise awareness among PNC peers on gender issues, approaches, and tools to combat sexual and gender-based violence, including child protection.

(f) Support the fight against serious and organized crime: in support of the authorities of the Democratic Republic of the Congo and on the basis of information gathered and analysed, unilaterally or jointly with the PNC and/or FARDC to facilitate strongly targeted offensives in the DRC to neutralize armed groups and help reduce the threat they pose to State authority and civilian safety.

(g) Internal management of the peacekeepers' support and protection component (implementation of the recommendations from the Santos Cruz report): While implementing the above mandates, MONUSCO Police has developed several optimisation tools to accomplish its daily tasks. In this regard, several programmatic documents have been put in place to guide the activities and monitor the progress of each unit, such as the MMSS 2020-2021 work plan and the specific evaluation matrix for the IPO and FPU elements.

During the transition, UNPOL will continue to play a central role in building national capacity to effectively take ownership of the police reform process and ensure the implementation of the five-year PNC reform action plan, including through the ongoing development of the Joint UN Police Reform.

Support Programme 2021-2025. As part of efforts to establish a comprehensive criminal justice system and effective and accountable police services, the Mission will focus on providing strategic assistance in the identification and implementation of key activities with the Government of the DRC, UNCT, and the key stakeholders. This should include working at the political level to ensure that the basic principles and key prerequisites for sustainable reform are accepted, with the Congolese government taking the lead in ensuring equitable funding of the police (including salaries), tackling impunity and human rights abuses, and finding sustainable solutions to the demilitarisation of law and order management and the response to non-military threats.

In addressing the root causes of destabilisation, including inter-communal violence, UNPOL should continue to support the PNC in establishing a structured community-based policing system to be projected, including through the "Operational Strategy for Combating Insecurity" (SOLI), to ensure that the host State's security institutions are able to effectively carry out their functions after MONUSCO's departure.

MONUSCO Police continued to focus on advocacy with the Congolese Minister of the Interior to ensure effective involvement in the police reform system and with the PNC leadership to highlight respect for human rights and provide technical assistance and advisory services within the Executive Secretariat of the Reform Monitoring Committee (design body) and the PNC Commissariat General, as well as within the Inspection Générale de la Police Nationale Congolaise (IGPNC), which is a monitoring, capacity-building and advisory body on the reform, restructuring, and development of the national police, in strict compliance with the guidelines of the United Nations Human Rights Due Diligence Policy (HRDDP).

Although the worsening COVID situation in the DRC made the implementation of the mandate more difficult than ever before due to rapid decision-making and strict adherence to COVID protocols, the Police component managed to fulfill its mandate while minimizing the spread of the virus within the component.

Reference is made to the Security Council Resolution 2556 of 18 December 2020, which authorised a staffing ceiling of 591 individual police officers for MONUSCO in accordance with the exit strategy. Following the recommendations of the Fifth Committee and based on the budgeted allocation, the MONUSCO police component is authorised to reach 455 officers instead of the 591 mentioned in the SCR 2556/2020 with a 23% vacancy rate.

The original deployment plan was to reach 455 IPOs by the end of June 2021, however, restrictions due to COVID-19 have impacted the deployment process and administration. The plan has been 83% achieved as the actual strength of the MONUSCO Police component is 377 IPOs as of 10 July 2021. UNPOL component has managed the deployment of 135 police officers from January to June 2021 from the various Police Contributing Countries (PCCs).