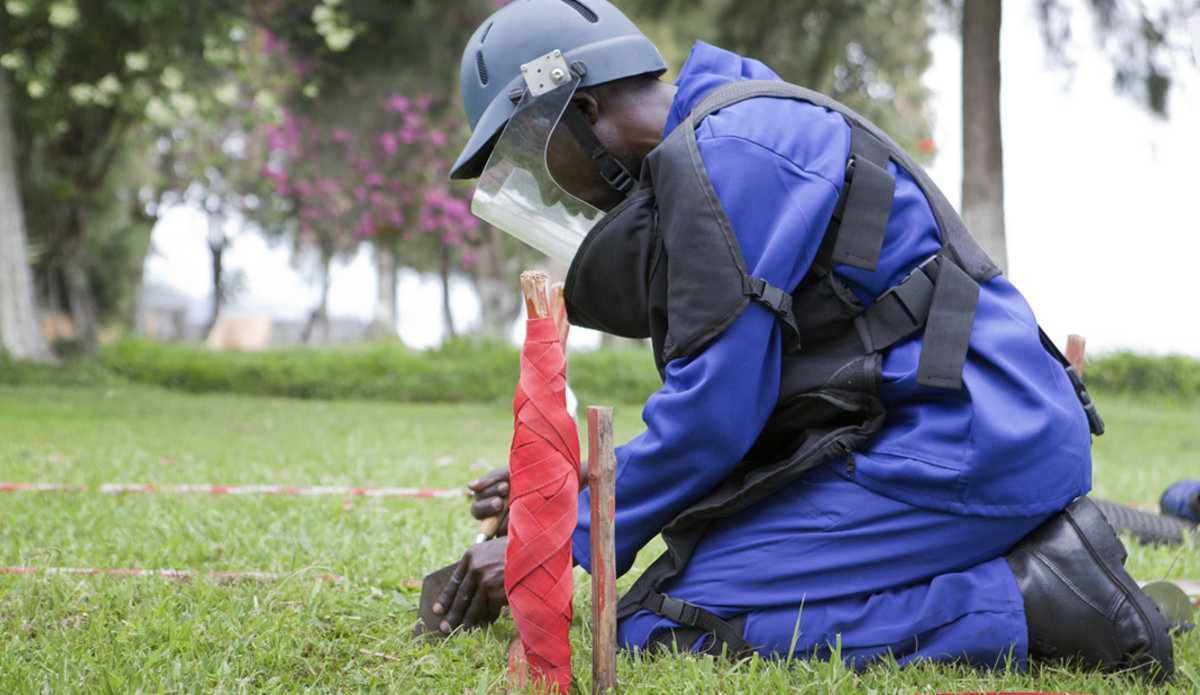 A deminer is practicing to clear a dangerous area. Photo MONUSCO

Established in 1997, the United Nations Mine Action Service (UNMAS) works to eliminate the threat posed by mines, explosive remnants of war and improvised explosive devices by coordinating United Nations mine action, leading operational responses at the country level, and in support of peace operations, as well as through the development of standards, policies and norms.

As a specialized service of the United Nations located within the Department of Peace Operations, UNMAS operates under UN legislative mandates of both the General Assembly and the Security Council. UNMAS also responds to specific requests for support from the UN Secretary-General or designated official.

The UNMAS DRC programme supports MONUSCO in the achievement of its mandate, Protection of Civilians (PoC) and contributes to the stabilisation and strengthening of State institutions and key governance and security reforms.

UNMAS is working to ensure the protection of civilians through its 2 person Improvised Explosive Devices (IED) Disposal team based in Beni to enhance MONUSCO’s IED disposal capabilities, preparedness and readiness to protect civilians and UN staff in emergency situations.

Furthermore, UNMAS with funding from MONUSCO has provided support to the national authorities in order to enhance their capability to safely manage, store and mark state-held weapons and ammunition.

Why are we in the Democratic Republic of Congo (DRC)?

Since independence in 1960, the Democratic Republic of the Congo (DRC) has been locked in a spiral of armed conflict resulting in nationwide contamination by explosive hazards and an illicit proliferation of small arms and light weapons.

The latest small arms survey estimates that approximately 950,000 weapons are illegally circulating in the country that the majority of those weapons would be transferred through neighboring countries (Burundi, Rwanda, Uganda, South Sudan, Tanzania). Additionally, the Group of Experts on DRC has expressed their concerns on reports of possible diversion of state-held weapons to civilians. In 2008, the GoDRC established the National Commission for Small Arms and Light Weapons Control and Armed Violence Reduction (CNC-ALPC), a civilian governmental entity to tackle the issue.

UNMAS has been present in the DRC since 2002 and currently has offices in Kinshasa, Goma, Beni and Bukavu, to coordinate and implement its country-wide activities in support of the Government of the DRC, MONUSCO and the UN Country Team.

In compliance with Security Council Resolutions 2098 (2013), 2409 (2018), 2463 (2019), 2502 (2019), 2556 (2020), UNMAS conducts explosive management activities to protect civilians and contribute to the safety and security of UN personnel, as well as weapons and ammunition management activities, to reinforce the current capacity of national security state actors to safely store and manage their weapons and stockpiles, in line with international standards.

Summary of the history of explosive device management in the DRC

Ø   2002  : The Mine Action Service was set up in the DRC by the Security Council under paragraph 7 of Resolution 1291 (2000) - “The Security Council decides that MONUC (renamed MONUSCO), in cooperation with the Joint Military Commission, have the following mandate: to deploy mine action experts to measure the extent of the problem posed by mines and unexploded devices, to coordinate the launch of mine action, to develop a action plan and to carry out, if necessary, the emergency operations necessary to enable it to fulfill its mandate . Since then, UNMAS DRC has supported MONUSCO and the DRC government (GoRDC) with explosive device management activities.

Ø   2013  : In order to align its operations with Resolution 2098 (2013) adopted by the Security Council, the Mine Action Service has strengthened its support for MONUSCO operations while transferring all humanitarian mine action actions to the country team and the GoRDC. In other words, the capacity building activities of the Congolese Mine Action Center (CCLAM), danger awareness raising and humanitarian landmine / ERW demining activities are carried out only by the United Nations country team and the GoRDC. The final transfer of coordination of all humanitarian demining activities to CCLAM was completed in January 2016. UNMAS also supported the National Commission for SALW control and ARmed Violence Reduction (CNC-ALPC)  in the implementation of its National Action Plan for SALW management and control 2012-2016.

Ø   2014/2015  : During this period, the MONUSCO Mine Action Service (UNMAS DRC) redefined the program and reorganized the scope of its operations towards the achievement of the set objectives of the mission, as indicated in the Resolution 2147 (2014).