About 3,340 women, children and men have been given support to restart their lives after falling prey to sexual exploitation or abuse (SEA) by United Nations personnel, thanks to a Trust Fund established in 2016. On Friday, a meeting was held at UN Headquarters in New York, to report on the progress and impact made, and collect new pledges from Member States.

“Over the years, in my travels, I have been haunted by many encounters with women and girls, men and boys scarred by sexual violence and further stigmatized sometimes by their own communities,” said the UN’s chief of management, Jan Beagle, as she opened the meeting. “I have also been inspired by the courage and resilience with which those affected set about rebuilding their lives,” she added.

“The United Nations has a unique responsibility to set a global standard for preventing, responding to and eradicating this abuse, and addressing its impact”, she stressed.

In the first quarter of 2019, according to latest figures issued on 30 May, the United Nations recorded a total of 37 allegations of sexual exploitation and abuse (SEA) against UN staffers, including civilian and uniformed personnel from peacekeeping operations, agencies, funds and programmes. So far, most of these allegations remain under investigation.

Sexual abuse in UN terms is defined as “the actual or threatened physical intrusion of a sexual nature, whether by force, or under unequal or coercive conditions.” Sexual exploitation is “any actual or attempted abuse of a position of vulnerability, differential power, or trust, for sexual purposes, including, but not limited to, profiting monetarily, socially or politically from the sexual exploitation of another”.

A fund to rebuild dignity

The Trust Fund in Support of Victims of Sexual Exploitation and Abuse Fund is one of the many initiatives set up by the United Nations over recent years to address the scourge internally. The purpose of the Fund is to finance assistance for survivors and children born of sexual exploitation and abuse by UN personnel.

Since 2016, the $2 million pledged to the Fund has enabled the implementation of several empowerment and income-generating projects.

So far, most of the funds were collected through contributions from 19 different Member States, but not exclusively: close to $400,000 came from payments withheld from personnel, against whom sexual exploitation and abuse allegations have been substantiated.

There are currently six active projects:

Watch how this project in the DRC has changed the lives of hundreds of victims:

Victims of sexual exploitation and abuse rebuild their lives

“Additional proposals have been submitted and are under review, and/or are being developed to provide additional assistance and support in the DRC, Haiti, South Sudan and CAR,” Under-Secretary-General Beagle explained.

About 3,340 people have benefitted from the implemented projects so far.

Ms. Beagle listed three key lessons learnt from the first two years of the Fund’s operations: the importance of a victim-centred approach; the importance of flexible, unearmarked and non-time-bound financial contributions from Member States; and the importance of integrating projects in existing programmes, instead of one-off initiatives. 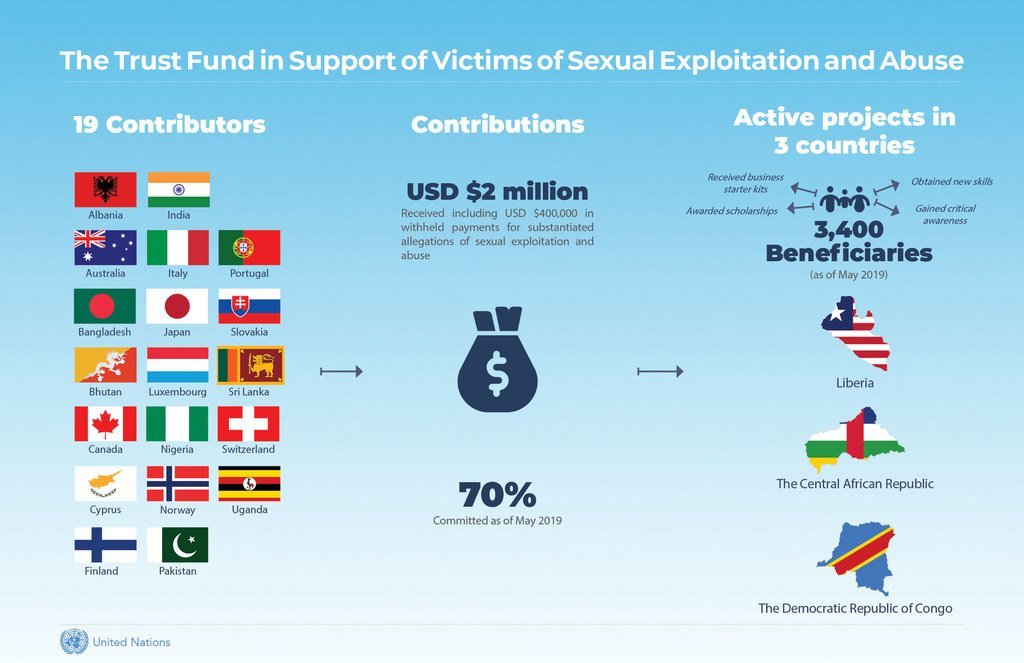 United Nations
Trust Fund in Support of Victims of Sexual Exploitation and Abuse.

“Sexual exploitation and abuse by United Nations personnel are system-wide wrongs,” explained Victims’ Rights Advocate, Jane Connors. “To date, the Fund has supported projects in peacekeeping or mission contexts, but it is a resource that, going forward, should be accessed widely across the system and also benefit victims in non-mission contexts,” she stressed.

The Advocate’s Office is currently conducting a pilot mapping of services for victims including legal, medical, safety, shelter and livelihood support available in eight countries, and this work is being expanded to cover other countries: “We are identifying gaps, overlaps, lessons-learned and best practices to have baseline information so resources can be directed to improve these services”, said Ms. Connors, as she called Member States to “nurture and grow” the Fund.

Combatting SEA at the UN from all angles

The Secretary-General’s strategy launched in 2017, focuses first on addressing the issue within the UN system, including peacekeepers, as well as those mandated by the UN to carry out programmes (implementing organizations and Security Council-authorized non-UN military). This covers more than 90,000 personnel in over 30 entities as well as more than 100,000 uniformed personnel.

In tackling this third and last angle, the Trust Fund is a “key tool to lead that effort and stand alongside victims and children born as a result of SEA”, Mr. Jenča stressed, thanking all Member States for supporting the fund give a voice to and to empower victims and their communities”.

Representatives from a dozen countries reiterated their support to the resource mobilisation mechanism and the projects it has enabled. Several promised additional funding to come.